You can travel in many different ways: with the body, with the mind, with the imagination and again with the Heart and with the senses …
Discover all this by visiting our territory.

Rome, ancient capital of the Roman Empire and seat of the Papacy, is the capital of Italy. Full of art, history and culture is certainly one of the most beautiful cities in the world: San Pietro, located inside the Vatican City, is the most famous church, the Colosseum in the center of the city is the largest roman monument, Castel Sant’Angelo, was at first a tomb, then a military outpost, a prison and now a museum. Piazza di Spagna, Piazza Navona, the Trevi Fountain, the Imperial Fora, the Pantheon, Caracalla’s thermal baths are some of the best examples You can admire in the Eternal City, the city with the greatest number of churches and fountains in the world. 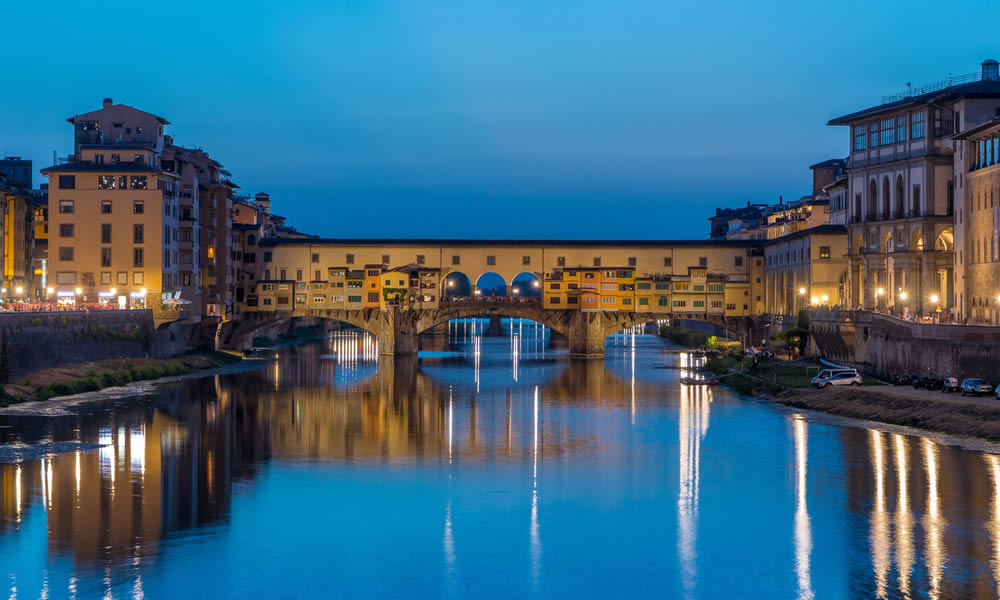 City of Roman origin and known in the world as the Cradle of the Renaissance, Florence is one of the most visited tourist destinations in Italy and in the world. The heart of Florence is Piazza della Signoria with Palazzo Vecchio and the Uffizi Gallery, one of the most important and most visited museums in the world. Nearby the Cathedral of Santa Maria del Fiore with the famous Dome of Brunelleschi, Giotto’s Campanile and the Baptistery of Saint John. The Ponte Vecchio is known today for its famous goldsmiths shops and for the romantic view. 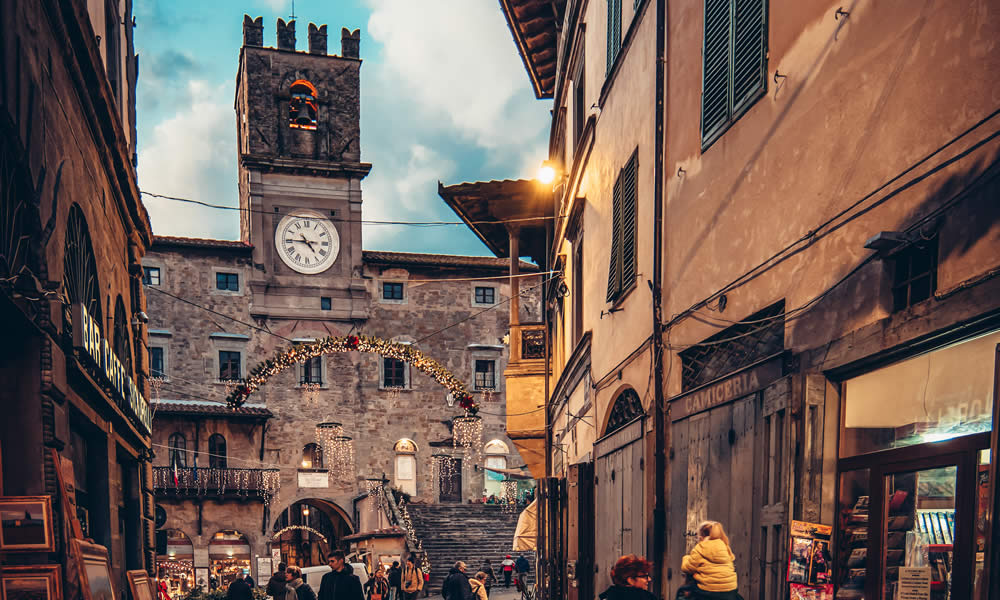 The city of Cortona is located at 600 metres above the sea level on the hill dominating the plain half way between Arezzo and Perugia and its foundation should be dated between the 5th and the 2nd century b.C. Among the buildings of greatest artistic and architectonic value in the most antique core of the city, we find various noble residences, the “Palazzo del Capitano del Popolo”, the “Communal Palazzo”, the Church of San Francesco and the Basilica of Santa Margherita. Cortona is known abroad thanks to the American writer Frances Mayes, who set here her novel “Under the Tuscan Sun”, released in 1996 and from which the film with Diane Lane was made. 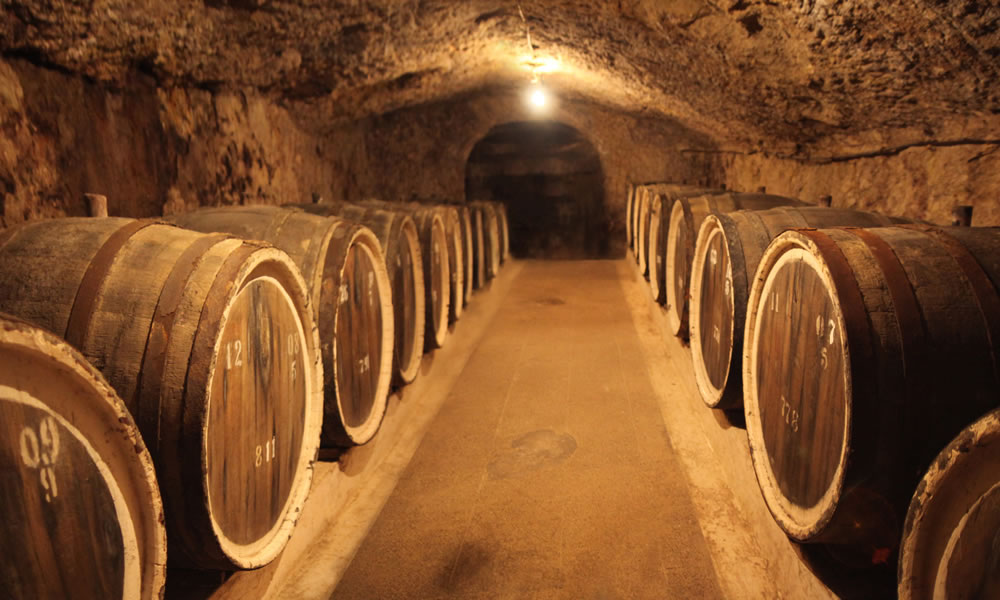 Montepulciano is built along a narrow limestone ridge at 605 m above sea level.
The town is encircled by walls and fortifications designed by Antonio da Sangallo the Elder in 1511 for Cosimo I. It is known mainly for the grandeur of its Renaissance palaces, for the elegant beauty of its churches and for the ‘Vino Nobile’, one of the most appreciated Tuscan wines. The urban center develops along a course that climbs along the hill reaching the central square, Piazza Grande, which is located at its top. For shoppers there are several leather goods, copper and ceramic shops. 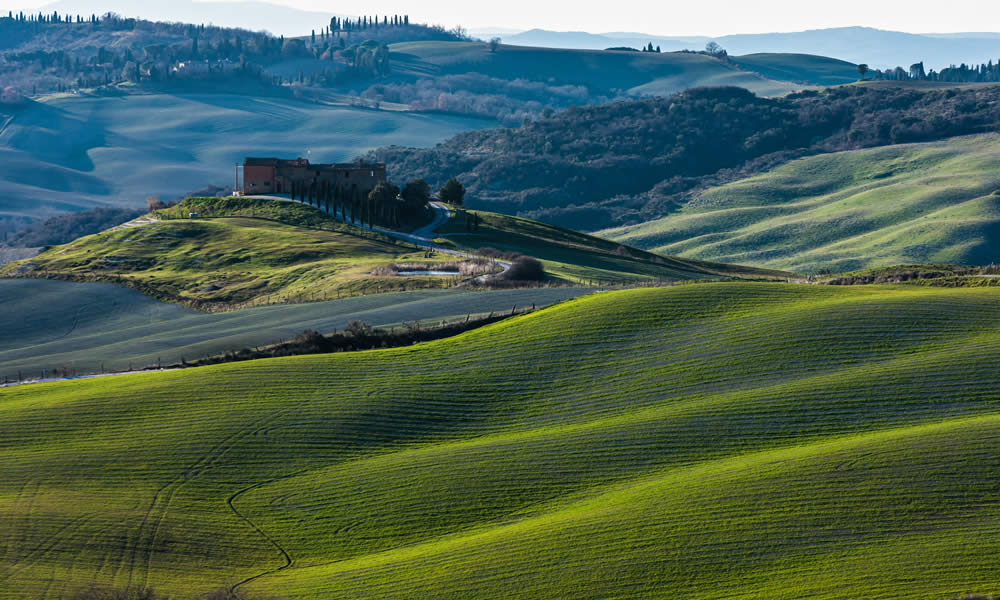 It was in this Tuscan town that Renaissance town-planning concepts were first put into practice, after Pope Pius II decided, in 1459, to transform the look of his birthplace.
He chose the architect Bernardo Rossellino, who applied the principles of his mentor, Leon Battista Alberti.
This new vision of urban space was realized in the superb square known as Piazza Pio II and the buildings around it: the Piccolomini Palace, the Borgia Palace and the cathedral with its pure Renaissance exterior and an interior in the late Gothic style of south German churches.

Siena has probably Etruscans origins, according to historians finds brought to light in this area. The city owes its fame to the famous Palio, horse race that takes place on 2 July and 16 August of each year, and to the established confectionery production that has consecrated the ricciarelli and cavallucci biscuits and the panforte. Unique for its unusual shell shape and for the integrity of its architectural spaces, Piazza del Campo is the heart of the city. 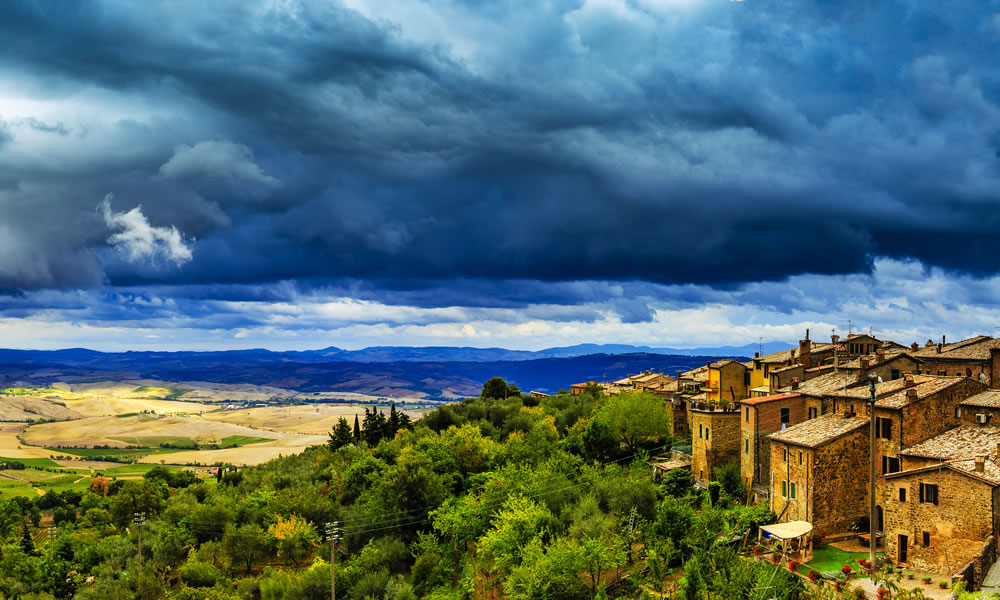 Hilltop town surrounded by olive groves and the famous Brunello vineyards, Montalcino has very antique origins. . Its name derives from the Latin “Mons Ilcinus”, mountain of lysses, and its inhabitants are called Ilciniani. In the Middle Ages it came under the rule of the Senesi who built the pentagonal fortress and the Palazzo dei Priori, now the Town Hall. The picturesque Piazza del Popolo is the medieval heart of the village. In its museums there are numerous works by Senesi artists from the 1300s and 1400s. There are numerous wineries where you can taste the famous Brunello di Montalcino DOCG. 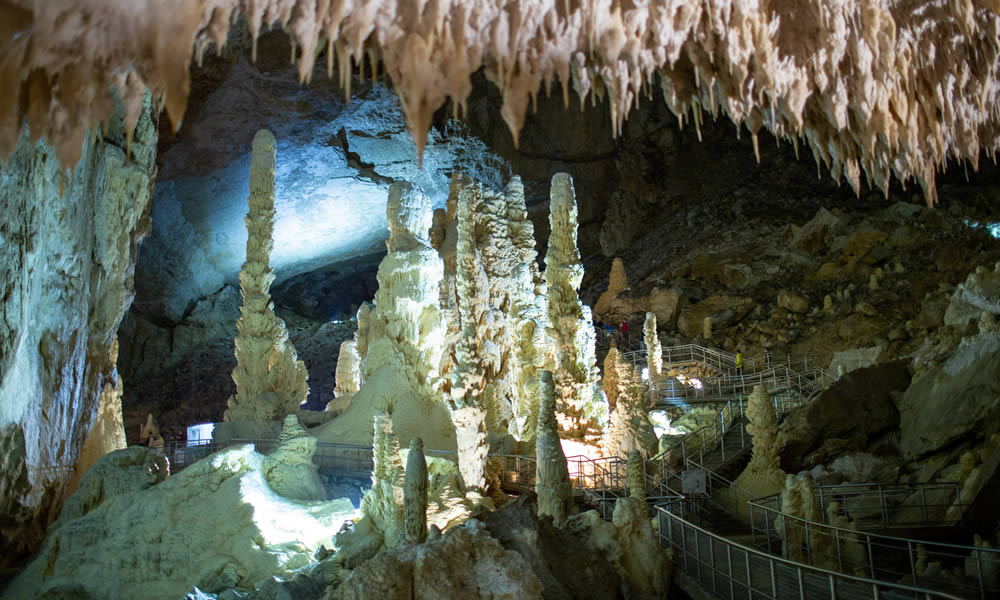 The tourist route of the Frasassi Caves, discovered in 1971, is about 2 hours and is suitable for visitors older than 12, with few difficulties to face and characterized by short climbs, tunnels, straits and slides. However, it is necessary to pay attention to the slightly uneven and at times slippery bottom, due to the strong accumulation of mud. The “off-route” starts from the “Infinity Hall”, the last of the classic tourist route, continues with the bottleneck of the “Cinnamon” to get to the “Four Sisters”. A long tunnel leads to the “Finland Hall”. 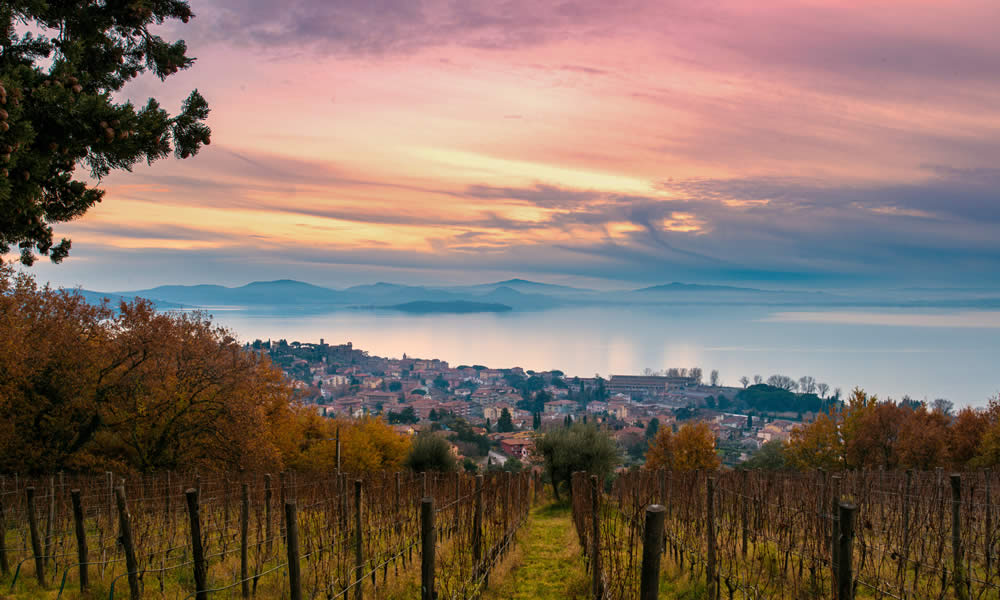 Passignano is a city-castle situated on a rocky promontory on the north east side of lake Trasimeno. Its history has always been linked to that of the castle, whose Ponente Tower still dominates the town. The transformation from a fishing village to the ‘Pearl of Trasimeno’ dates back to 1907 when the first vaporine, Concordia, transported Queen Margherita of Savoy on a trip to the lake, which brought immediate notoriety to the country. On the last Sunday of July of each year takes place the “Palio delle Barche”, a historical re-enactment of the escape of the Oddi that took place in 1495, which sees the four districts compete in a race that alternates boat routes on the lake and on land, through the streets of the village with boats on their shoulders. 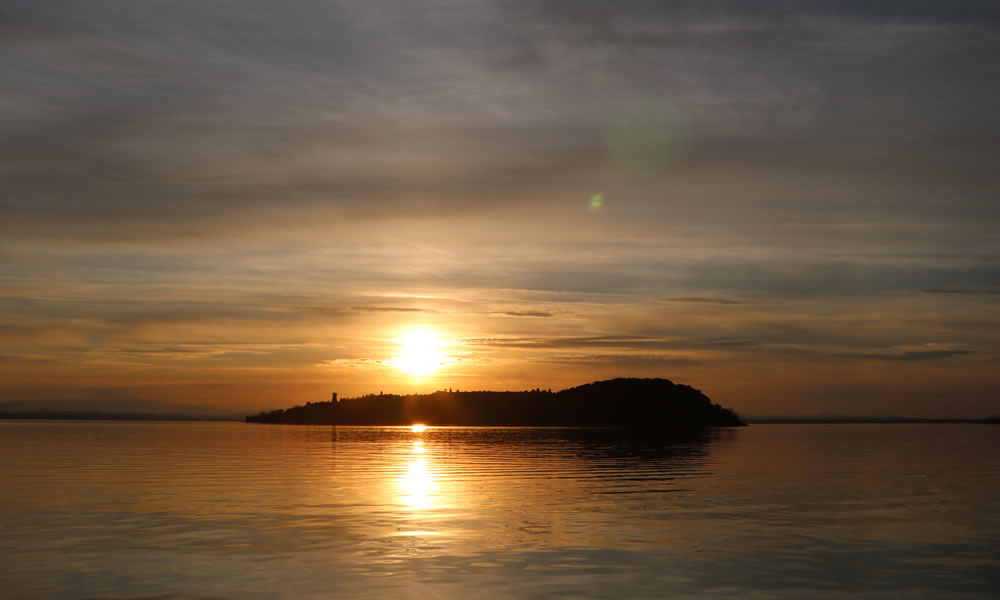 The settlement sprang up in the late Middle Ages, but during Roman times the area was the scene of the famous Battle of Trasimeno (217 BC.), in which the Carthaginians under Hannibal defeated the Roman legions commanded by consul Gaius Flaminius.
Tuoro sul Trasimeno was a fishing and farming village and got its name from the term “pesca dei tuori”, a fishing technique used on the lake in ancient times. As well as the Palazzo del Capra, now owned by Perugia University, Tuoro offers an interesting historical and artistic itinerary dedicated to the battle of Hannibal, about 7 km long, with equipped areas and information boards. At Punta Navaccia You find the area known as Campo del Sole, where You can admire 27 statue-columns made of the local serena stone by various artists since 1985. Lovers of walks can reach the characteristic Torre Torta in the hamlet of Vernazzano and Monte Castelluccio Natural Park.

Set on the slopes of Mount Subasio, Assisi is the town of S. Francis. On the Piazza del Comune look major palaces like the Palazzo del Capitano del Popolo, the Palazzo dei Priori and the temple dedicated to Minerva.
World famous monuments and buildings are the Franciscan monastery with its Basilica widely decorated by Giotto, the XIV century S. Chiara church, the S. Maria Maggiore church with the frescoes by Pinturicchio and the Rocca Maggiore set on a cliff overlooking the town.
The S. Maria degli Angeli church houses the Porziuncola chapel, where the Franciscan order was founded.
A few kilometres from the town one may visit the Franciscan Eremo delle Carceri, built by S. Bernardino from Siena in XV century. 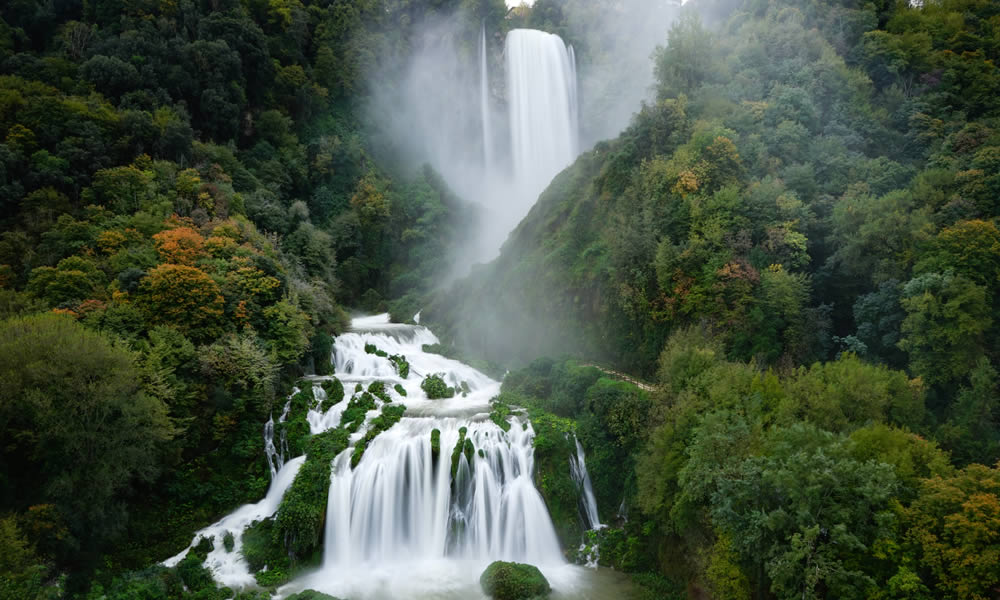 The Marmore Waterfall has ancient origins, dating back as far as 271 b.C., in the middle of Roman times, when the consul Manio Curio Dentato ordered the construction of a canal to drain the stagnant waters of the Velino towards the Nera, diverting the course of the river and forming the waterfall. Over time, two new canals were built to counter the flooding of the two rivers, one in 1422 and one in 1547. It was only with two other interventions, in 1601 and 1787, that the waterfall took on its present appearance. The Park offers six routes, some also suitable for children and others more demanding, as well as rafting with different proposals according to your experience. 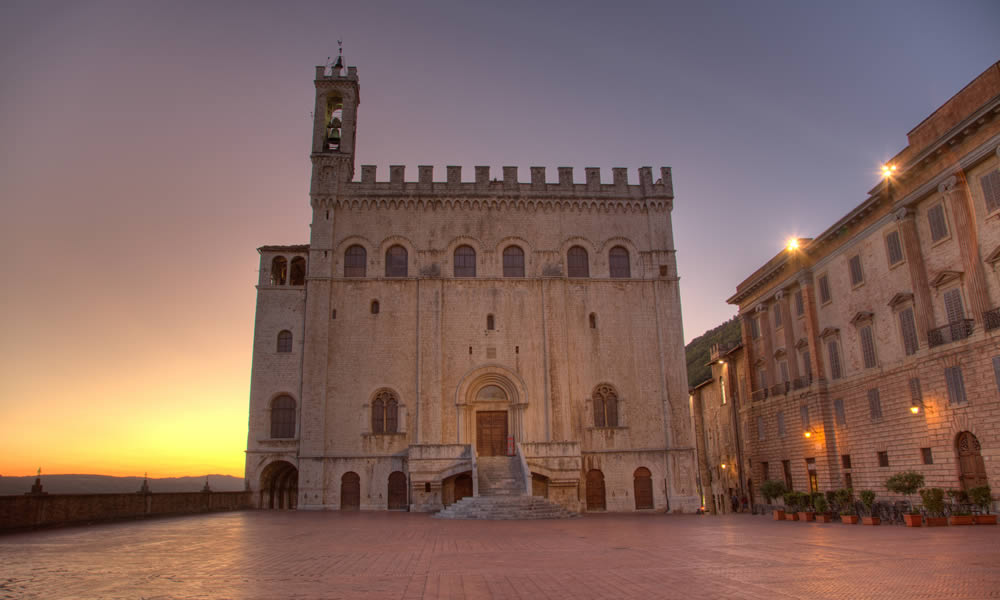 Founded by the Umbri, Gubbio was a very important centre during Roman times and during the Middle Ages had its major urban development with the construction of the city’s gateways and aqueduct.
Piazza Grande is a real medieval architectural achievement in its hanging between the Palazzo dei Consoli and the Palazzo Pretorio, never finished, A cable car connects the city to Mount Ingino (908 m above sea level) and leads to the Basilica of Sant’Ubaldo. On May 15th of each year the Ceri Feast takes place: with great participation of the Eugubines three wooden candles crowned with statues of Saints are transported through the streets of the city.

Perugia, capital of Umbria region, is equipped with Etruscan walls and a delightful medieval old town. It is home to two universities: the University of Studies, founded in 1308, and the University for Foreigners. Piazza IV Novembre is the monumental and social center of the city, where the Gothic Palazzo dei Priori with the National Gallery is located, together with the cathedral and, in the center, the Fontana Maggiore of the thirteenth century. Perugia, in addition to a wide artistic heritage, offers internationally renowned events and events, including Eurochocolate in autumn and Umbria Jazz in July. 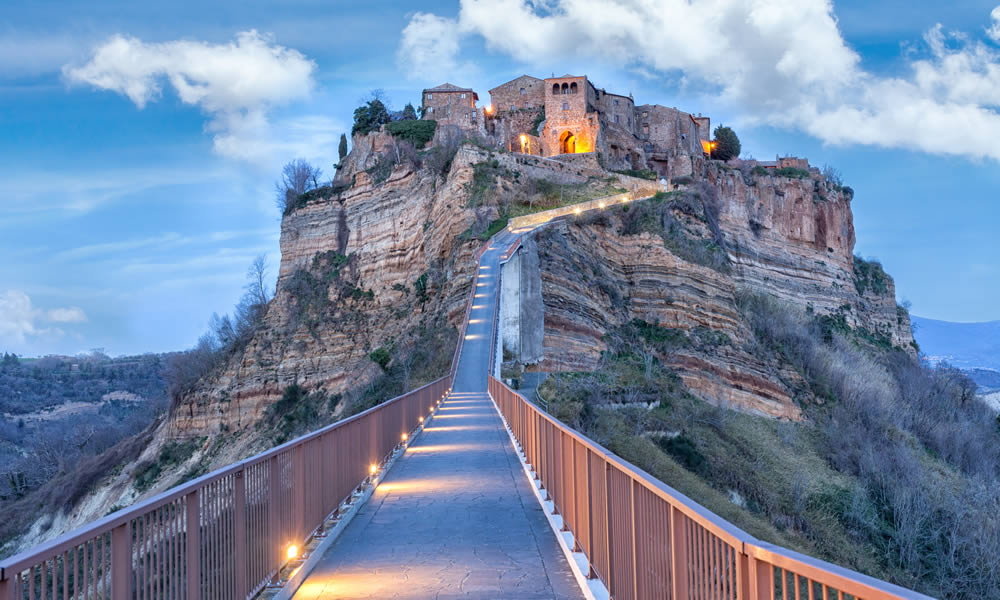 A long pedestrian bridge of about 300 m that connects the belvedere to Civita di Bagnoregio is the only way to reach the town, a fairytale village of Etruscan origin that seems to be suspended between myth and history: ancient houses that rise around the main square with the Church of San Donato and others overlooking the valley of the badlands , Civita di Bagnoregio is called “The City That Dies”, due to the continuous erosion of the small hill on which it stands. The bridge is accessed through the payment of a ticket that can also be purchased online or by choosing group or private tours. 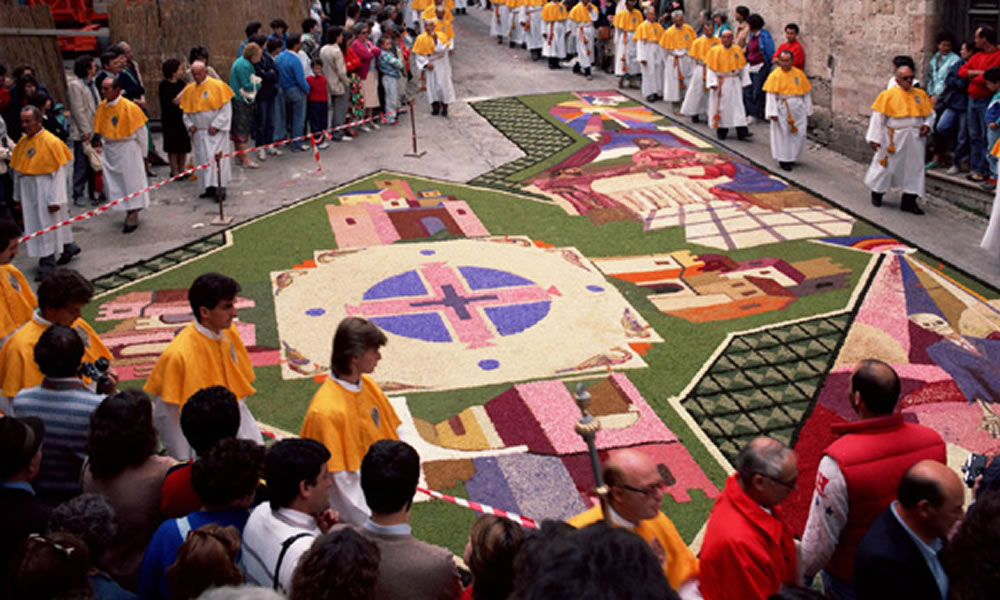 Spello is an enchanting village located at the foot of Mount Subasio and surrounded by centuries-old olive groves from whose plants a high quality and valuable oil is obtained. Founded by the Umbrians, it retains the signs of its long Roman and Lombard history. In the 12th century it became an independent municipality and lived an era of intense artistic activity in which it enriched himself with Renaissance masterpieces of Pinturicchio, Perugino and Nicolò di Liberatore called “L’Alunno”. The Church of Santa Maria Maggiore, the Civic Art Gallery and the Villa dei Mosaici are worthy a visit. Spello is known for the magnificent “Infiorate”, floral arrangements that are real works of art created every year on the occasion of Corpus Christi by artists and inhabitants of the village, in collaboration with the many tourists.

Lake Trasimeno is the largest lake in centre Italy, the 4th biggest lake in the whole country. It has fluvial and perhaps even tectonic origins.
It’s heart-shaped and it surface is 128 square kilometers.
The deepest point of the lake reaches 6 meters, its banks are low and surrounded by a reed-bed and hills with olive trees and vineyards, with gardens and small farms. Throughout the year there are 201 different species of birds, which you can admire during guided tours at the naturalistic oasis La Valle.
The area of Trasimeno belongs to the region Umbria, although it has deep cultural connections with Tuscany as well. The lake actually belongs to a boundary area between the two regions, where dialect, popular and culinary traditions are uncertain.